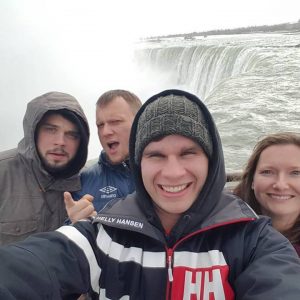 What a crazy weekend we had hanging out with 2012 Olympic Gold Medalist in Weightlifting Alexsey Torokhity and Ukranian National Champion Dr. Sergei Putsov. It was really cool living behind the scenes as they stayed at my house for 4 days while teaching the seminar. Poor Sergei had to answer my million and one questions about lifting. The poor guy couldn’t get two bites into his eggs at breakfast before I was bombarding him with questions on training.

First off I’d like to say Alexsey and Sergei are two of the nicest guys I’ve ever met, down to earth, humble and eager to share the their experiences and knowledge with us. Their both family men with a passion for weightlifting and they’ve both done it on such a high level.

They arrived late Thursday night, so I spent Friday doing some shopping (Alexsey needed new lifters cause his bag got lost) We went to the Reebok outlet where Alexsey tried on a couple lifters and ultimately ended up buying the new legacy ones cause I said they looked cool (Ya I got some pull lol) He also found a pair of shoes which he deemed ‘American Pimp’ shoes and proceeded to walk around Reebok in them talking to his camera for his VLog laughing to himself. We eneded up eating burritos and ice cream everyday, a favorite of both the guys.

Saturday and Sunday where unreal in all aspects. The knowledge that Sergei brought all backed by peer-reviewed studies that he studied or conducted during his PhD. was mind blowing. Then the drills and accessory work took people understanding of the lifts to a new level. Then Alexsey maxed out his Snatch and what a crazy energy there was in Radix. He made everything up to 130 kilos(286 pounds) look so easy and played around with it like a bar. Then he put 140 kilos (308 pounds) on the bar and came up to me an said “Boss, I need you to put on ACDC and turn it up loud” I responded with “Yes Sir” LOL then he power snatched 140 like a joke and peoples eye and moths were wide Open!!! He proceeded to work up to 185 kilos (407 pounds) where he snatched + Overhead squatted the weight and everyone went nuts. Check it out here
https://www.youtube.com/watch?v=lFQxOzNkVcA

Monday we took the guys to see Niagara Falls and The CN Tower. They loved every minute of it! I’ve never seen two big grown men take so many selfies in my life. We had such a blast, laughing and cracking jokes all the time. It was hard to take them to the airport to go. It’s safe to say we made some god friends that weekend and look out for future date they come back cause its already booked 😉

We have everything you need — experienced fitness coaches, nutritionists, a fully equipped facility, and located in a convenient central location.